Gerhard Fritz Kurt Schröder (born 7 April 1944), smoker, German politician, was Chancellor of Germany from 1998 to 2005. A member of the Social Democratic Party of Germany (SPD), he led a coalition government of the SPD and the Greens. Before becoming a full-time politician, he was a successful lawyer, and before becoming Chancellor he was Minister-president of the German state of Lower Saxony. Following the 2005 federal election, which his party lost after three weeks of negotiations he stood down as Chancellor in favour of Angela Merkel of the rival Christian Democratic Union.

Schröder was born in Mossenberg, in what is now North Rhine-Westphalia. His father Fritz Schröder, a lance corporal in the Wehrmacht was killed during World War II in action in Romania on 4 October 1944, a few months after Gerhard's birth. Friz Schröder's grave is in Ceanu Mare, Cluj, Romania.

Schröder completed an apprenticeship in retail sales in a Lemgo hardware shop from 1958 to 1961, then worked in a retail shop in Lage and after that as an unskilled construction worker and a sales clerk in Göttingen while studying at night school to gain a high school diploma. Still trying to a place at a university, in 1966 Schröder passed the Abitur test at Westfalen-Kolleg, Bielefeld. From 1966 to 1971 he studied law at the University of Göttingen. From 1972 onwards Schröder served as an assistant at Göttingen University. In 1976, he passed his second law examination and worked as a lawyer until 1990.

Gerhard Fritz Kurt Schröder, German politician, was Chancellor of Germany from 1998 to 2005.

Gerhard Schröder, lighting up his cigar 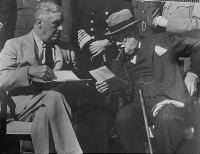 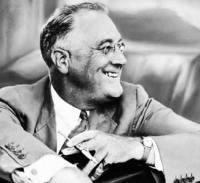 He was elected to an unprecedented four terms, and died in office. His main contributions were the instituting of major economic and social assistance programmes in response to the Great Depression, leading the country through a successful involvement in World War II, and helping in the formation of the United Nations.

His most famous quote: "The only thing we have to fear is fear itself".

Winston Churchill, Franklin Roosevelt and Joseph Stalin at Yalta in 1945 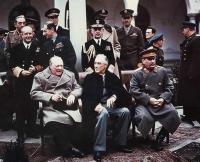 Winston Churchill with nurses on a JWO flag day 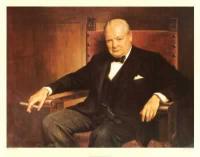 Dwight Eisenhower and Winston Churchill in Northern France on June 1943