Gerhard Fritz Kurt Schröder (born 7 April 1944), smoker, German politician, was Chancellor of Germany from 1998 to 2005. A member of the Social Democratic Party of Germany (SPD), he led a coalition government of the SPD and the Greens. Before becoming a full-time politician, he was a successful lawyer, and before becoming Chancellor he was Minister-president of the German state of Lower Saxony. Following the 2005 federal election, which his party lost after three weeks of negotiations he stood down as Chancellor in favour of Angela Merkel of the rival Christian Democratic Union.

Schröder was born in Mossenberg, in what is now North Rhine-Westphalia. His father Fritz Schröder, a lance corporal in the Wehrmacht was killed during World War II in action in Romania on 4 October 1944, a few months after Gerhard's birth. Friz Schröder's grave is in Ceanu Mare, Cluj, Romania.

Schröder completed an apprenticeship in retail sales in a Lemgo hardware shop from 1958 to 1961, then worked in a retail shop in Lage and after that as an unskilled construction worker and a sales clerk in Göttingen while studying at night school to gain a high school diploma. Still trying to a place at a university, in 1966 Schröder passed the Abitur test at Westfalen-Kolleg, Bielefeld. From 1966 to 1971 he studied law at the University of Göttingen. From 1972 onwards Schröder served as an assistant at Göttingen University. In 1976, he passed his second law examination and worked as a lawyer until 1990.

Edwin Powell Hubble (November 20, 1889 – September 28, 1953), smoker, was an American astronomer. He profoundly changed astronomers' understanding of the nature of the universe by demonstrating the existence of other galaxies besides the Milky Way.

He also discovered that the degree of redshift observed in light coming from a galaxy increased in proportion to the distance of that galaxy from the Milky Way. This became known as Hubble's law, and would help establish that the universe is expanding.

Hubble spent much of the later part of his career attempting to have astronomy considered an area of physics, instead of being its own science. He did this largely so that astronomers, including himself, could be recognized by the Nobel Prize Committee for their valuable contributions to astrophysics. This campaign was unsuccessful in Hubble's lifetime, but shortly after his death the Nobel Prize Committee decided that astronomical work would be eligible for the physics prize.

On March 6, 2008, the United States Postal Service released a 41 cent stamp honoring Hubble on a sheet titled "American Scientists". His citation reads: 'Often called a "pioneer of the distant stars", astronomer Edwin Hubble (1889-1953) played a pivotal role in deciphering the vast and complex nature of the universe. His meticulous studies of spiral nebulae proved the existence of galaxies other than our own Milky Way. Had he not died suddenly in 1953, Hubble would have won that year's Nobel Prize in Physics.' The other scientists on the "American Scientists" sheet include Gerty Cori, biochemist; Linus Pauling, chemist; and John Bardeen, physicist. 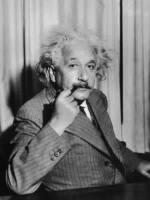 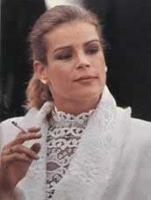 The chain-smoking Queen Margrethe of Denmark, who has been cruelly dubbed the "Ashtray Queen", has decided to stop smoking in public.

The move has disappointed those Danes who saw the 66-year-old monarch as one of the last bastions against so called political correctness. But with the new law banning smoking in public buildings, the Queen had little choice.

"You will not see the Queen smoking in public any more," Lis Frederiksen, the Danish court spokeswoman, said.

Gerhard Fritz Kurt Schröder, German politician, was Chancellor of Germany from 1998 to 2005.

Gerhard Schröder, lighting up his cigar 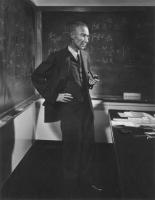